The Landslide Inventory that is compiled in the RESIST project for the central section of the Western branch of the East African Rift (LIWEAR) is now in landslides.nasa.gov/viewer, with landslides spanning 48 years from 1968 to 2016. The open data can be downloaded as part of NASA's Cooperative Open Online Landslide Repository (COOLR). 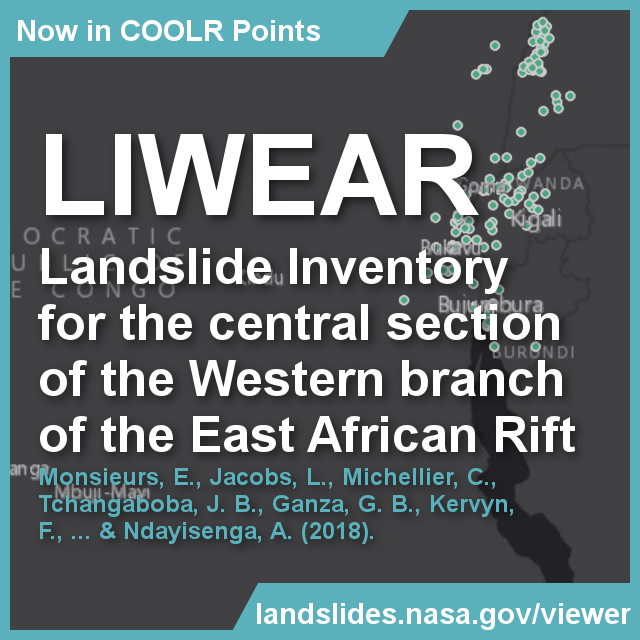 We flew for the first time a lightweight UAV platform over two large landslides in Bukavu (DR Congo) and its close surroundings. The images are used to construct a very high-resolution representation of the topography that will serve for the morphometric analysis of the different landslides. In addition, such product allows for an estimation of the 3D displacement field of the ground surface, helping to understand the mechanisms and dynamic of these landslides. 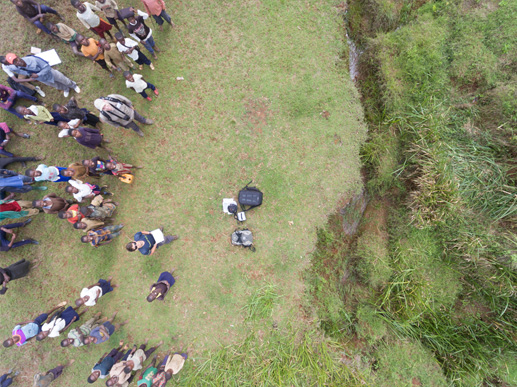 Two earthquakes occurred on September 23 (2016) in the Cyangugu/Bukavu/Idjwi region at 17h07 and 18h12 local time.  Preliminary magnitude estimation is resp. 4.6 and 4.3. Some aftershocks with magnitude up to 3-3.5 were also recorded. 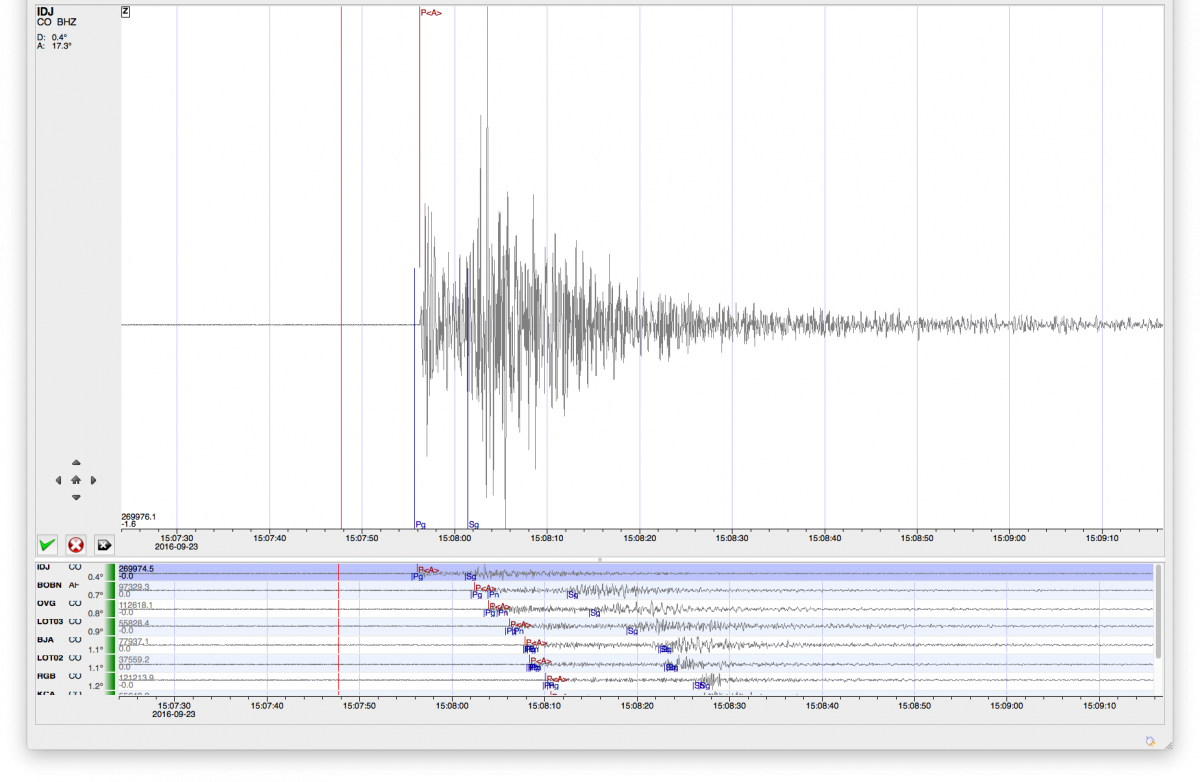 Vertical component of the first shock recorded in Goma, September 23, 2016. 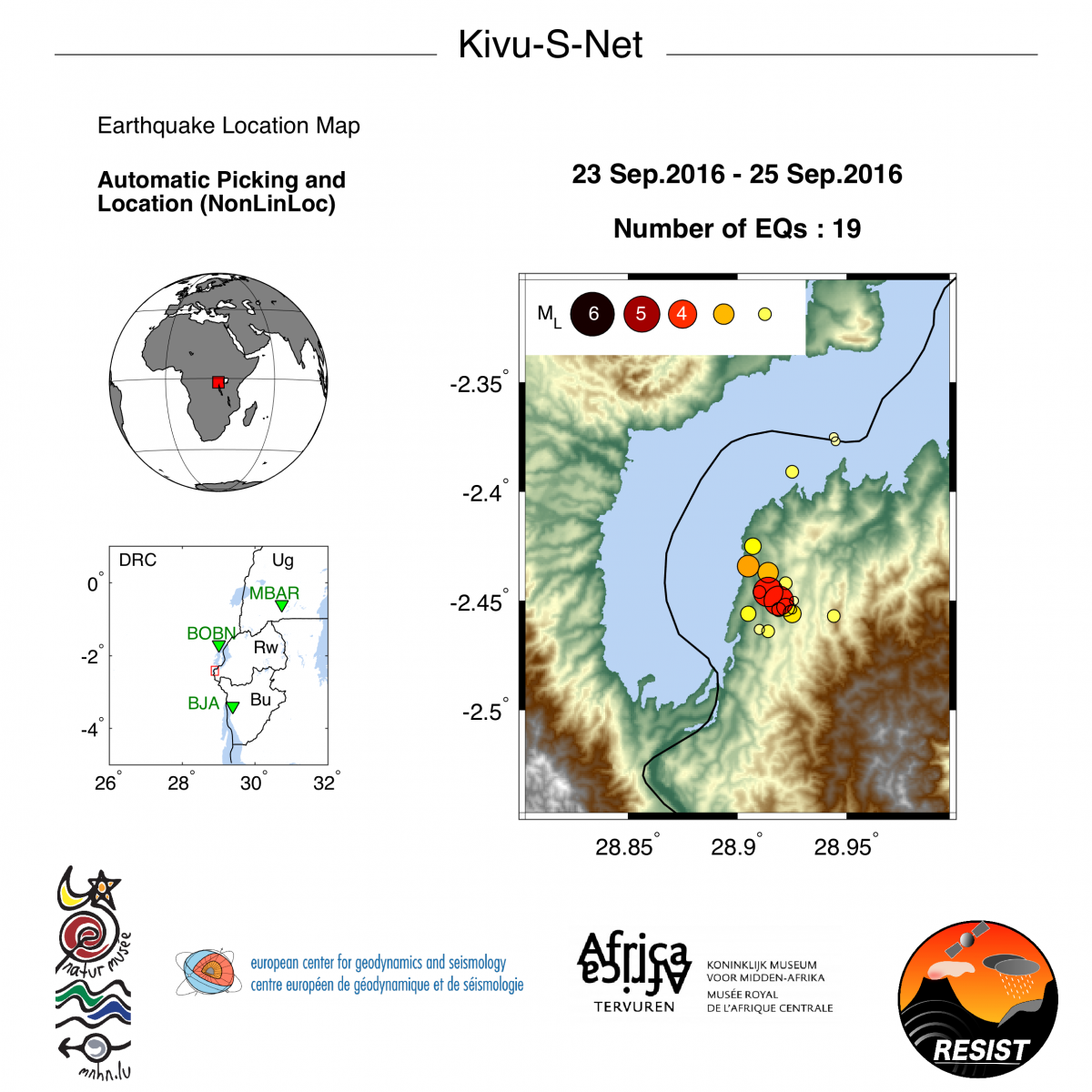 Since 17th of August 2016, lava flows again from the small cone that formed last February in Nyiragongo's summit crater. The image below is a Very Near Infra Red Sentinel 2 thermal image (Band 8, 842 nm, 10 m resolution) acquired on August 21, 2016. The lava escapes from the small vent (visible as a bright spot to the right side of the crater) and flows down into the lava lake (visible as a dark grey circle crossed by a line of hot spots to the left side of the crater). Thanks to the exceptional conditions (moderate gas plume dispersed by the wind and absence of clouds) one can even see the lava flow that splits in two branches and two subbranches before cascading into the lava lake. 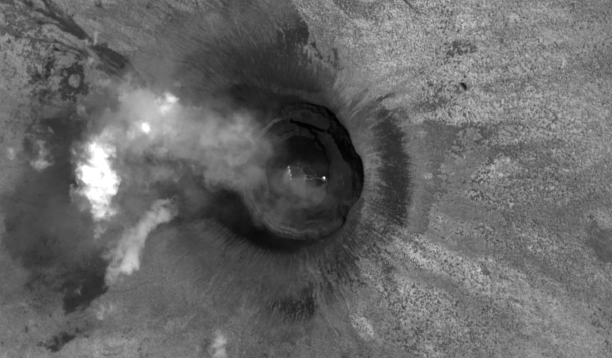 SO2 emissions over the Virunga Volcanic Province have decreased substantially since end 2015. Total mass of SO2 are close to the limit of detection of the OMI instrument. 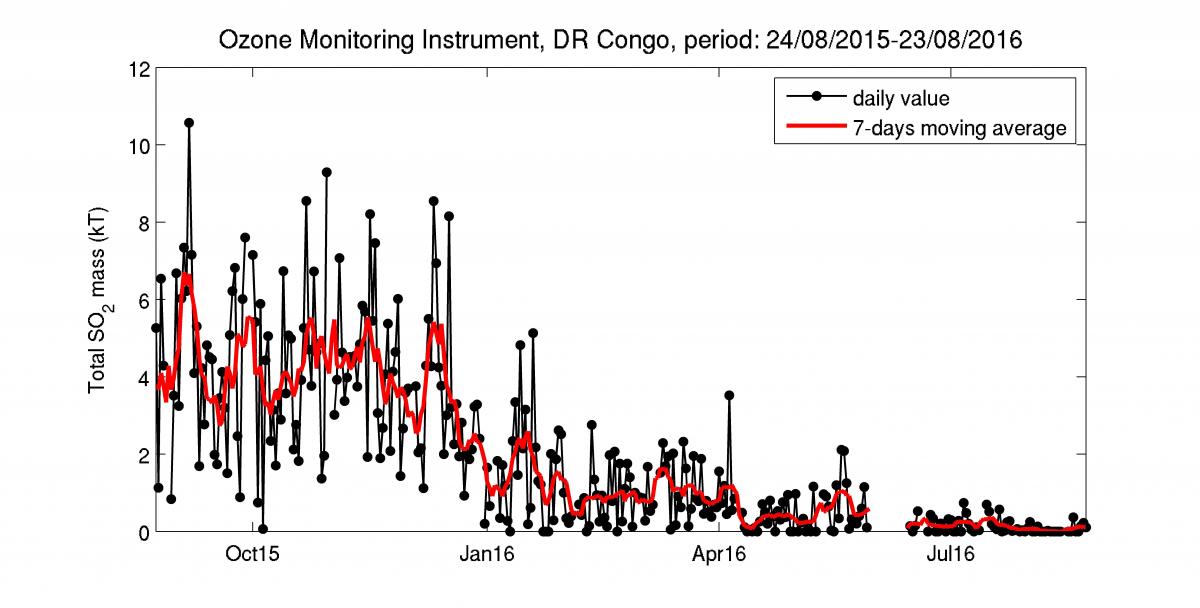 OMI time-series results for SO2 emissions over the Virunga Volcanic Province (DR Congo).

Since March 2016, 15 tiping buckets between North Tanganyika and North Virunga are fully operational. They are installed and maintained in collaboration with local partners. These stations serve for the validation of satellite rainfal products. 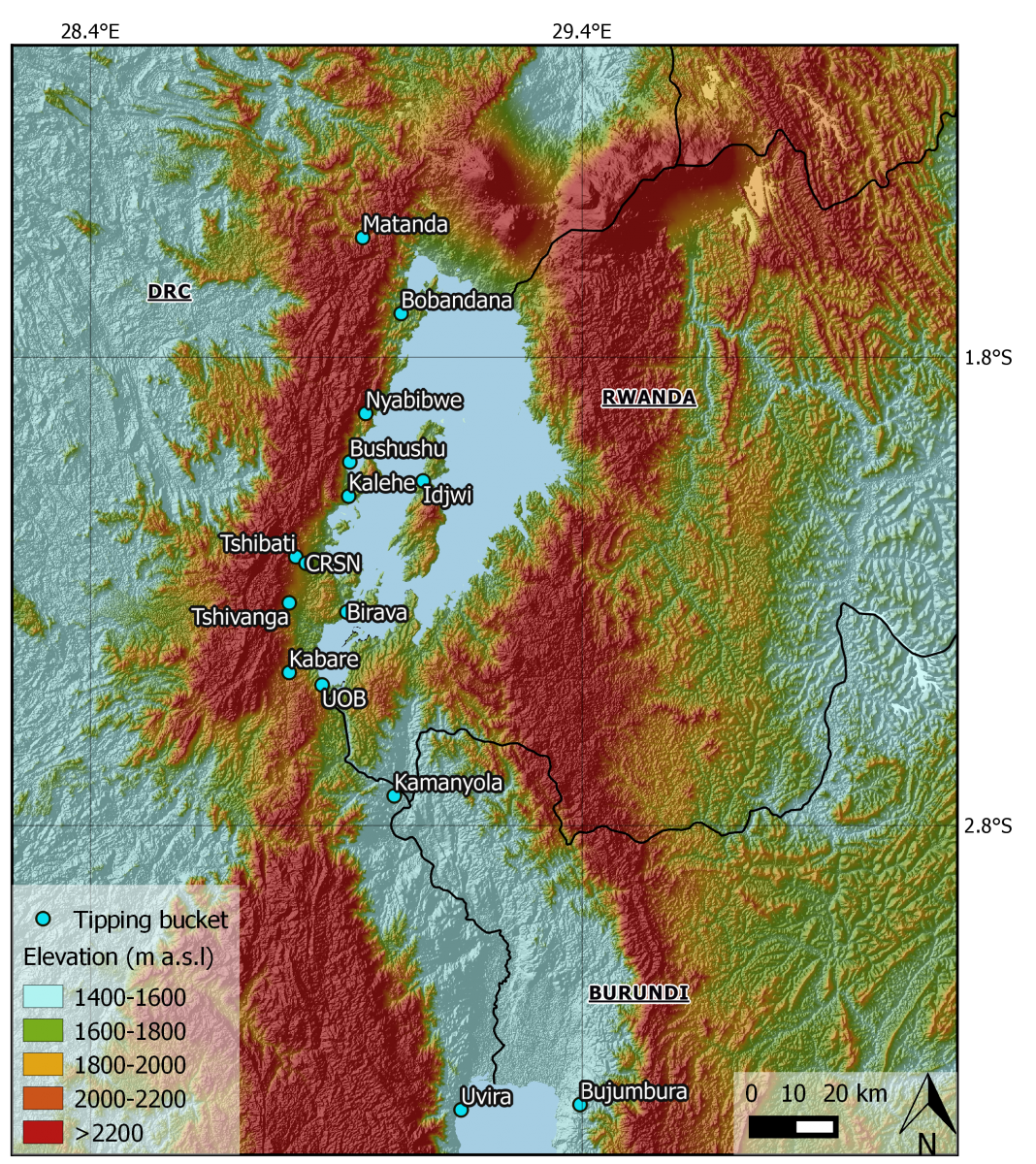 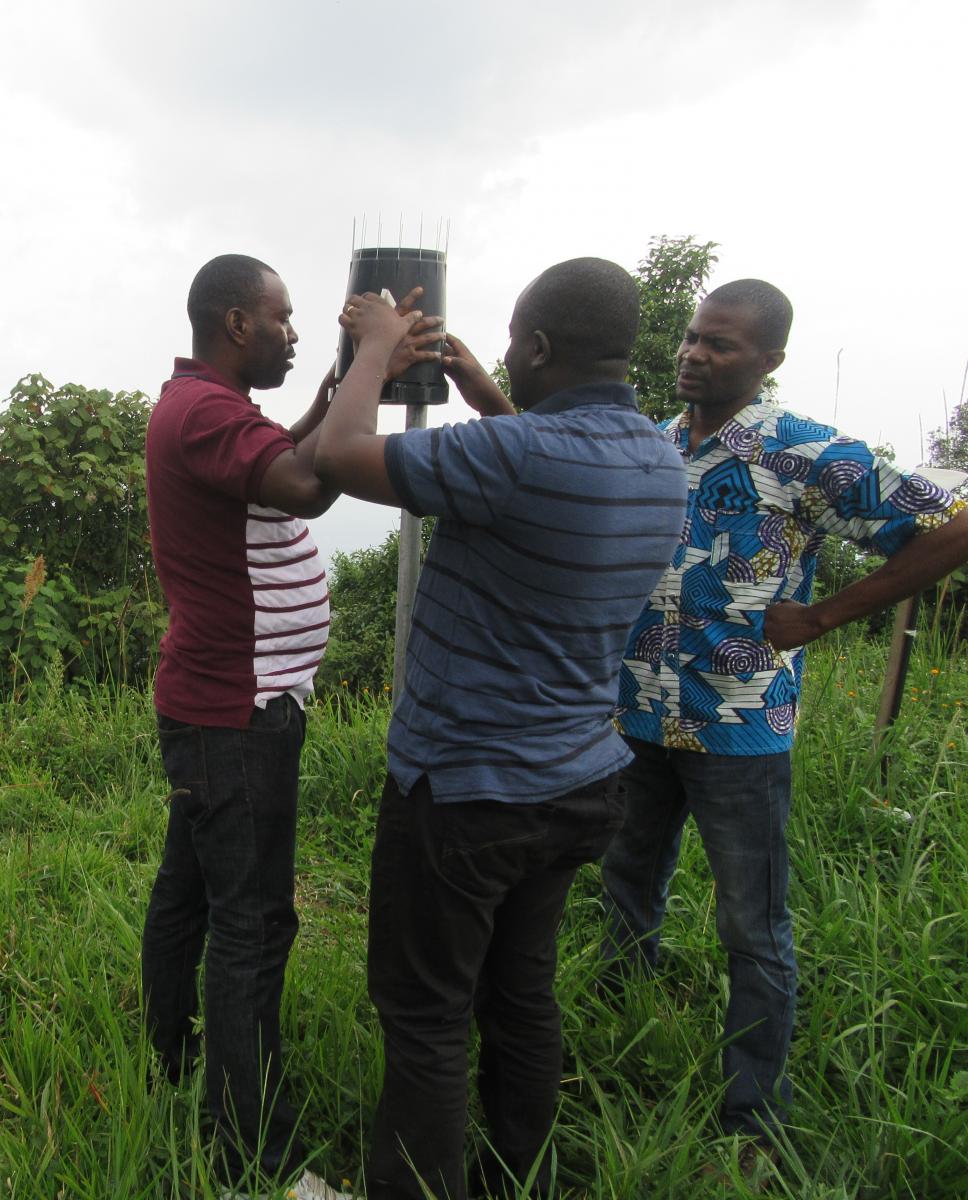 On the 22th of February 2016, an intensive training has been given at the Official University of Bukavu (UOB) on the use of Differential GPS (DGPS) equipment. A group of local researchers at the UOB will from now on conduct DGPS measurements every 2 months to enhance a continuous monitoring of the slow-moving landslide activity in Bukavu. 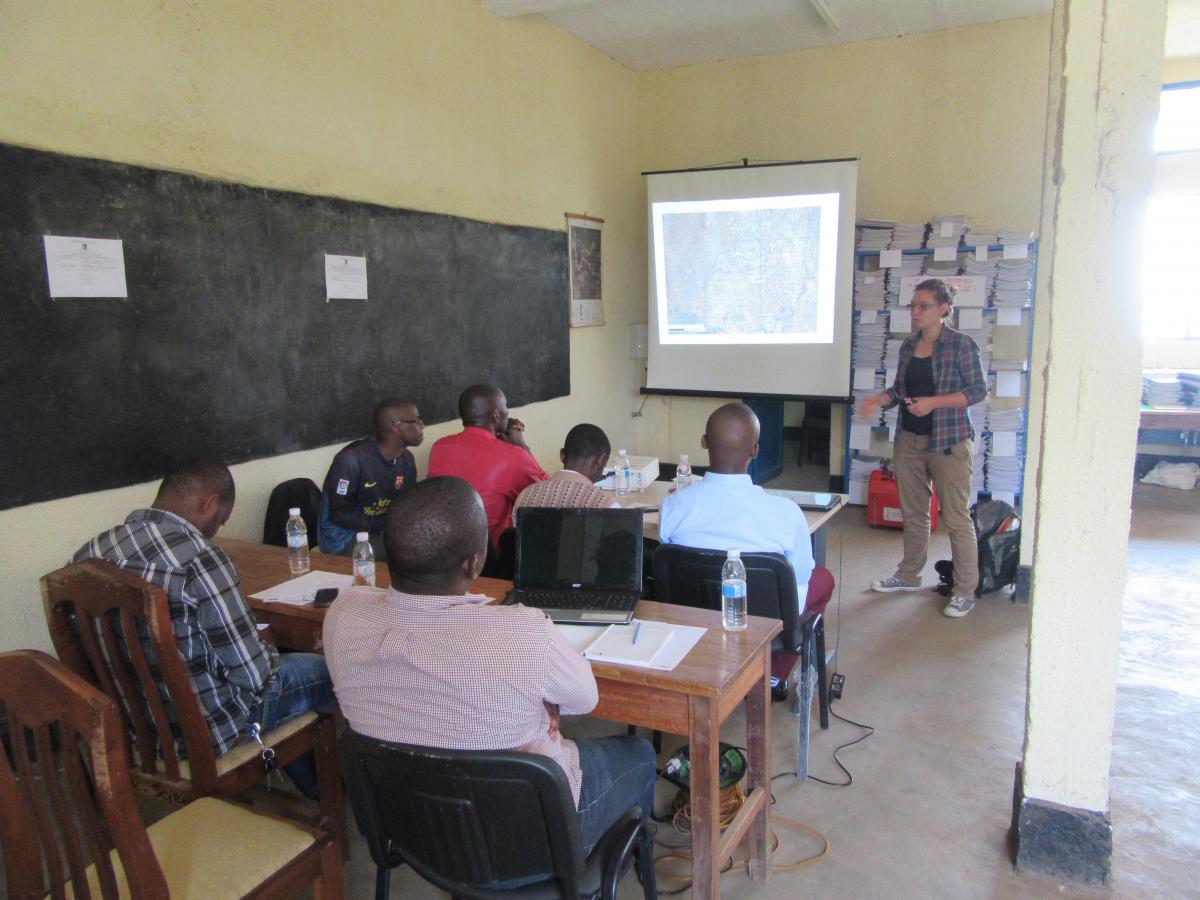 DGPS training at the University of Bukavu (DRC).

SO2 monitoring of Nyiragongo volcano by Envicam3, January 2016

The Envicam3 camera has been installed in Rusayo the 5th of December 2015. This location is 8 km distant from Nyiragongo volcano, on its south-west side, offering generally a field of view of the volcanic plume according to mean wind direction. Two co-aligned UV cameras allows for the synchronous acquisition of images at the on and off-band wavelength channels for superior SO2 detection. Data acquisition is proceeded with every 20 minutes in 2-minutes sequence (images recorded every 3 seconds). An integrated UV/VIS spectrometer, co-aligned with the cameras permits automatic ambient light compensation.

First results on SO2 monitoring of the Nyiragongo volcano (DRC).

Slow-moving landslide destroys facilities in the city of Bukavu (DRC)

Road deformation after 6 months and 16 days on the slow-moving landslide in the city of Bukavu (DRC). The dashed line is a reference for the same place.

After 6 months and 16 days, one of the road fractures in the Funu landslide (dashed line, reference for the same place) has developed, leading also to a fracture in a house along the road (City of Bukavu, DRC).

In September 2015 the installation and updates of the Kivu-S-Net seismic network and Kivu-G-Net GNSS network was mostly completed. The stations are concentrated in the Virunga volcanic area, but also extend south to Bujumbura in Burundi. The data are telemetered from most stations. The photos show installations at different stations in the network. 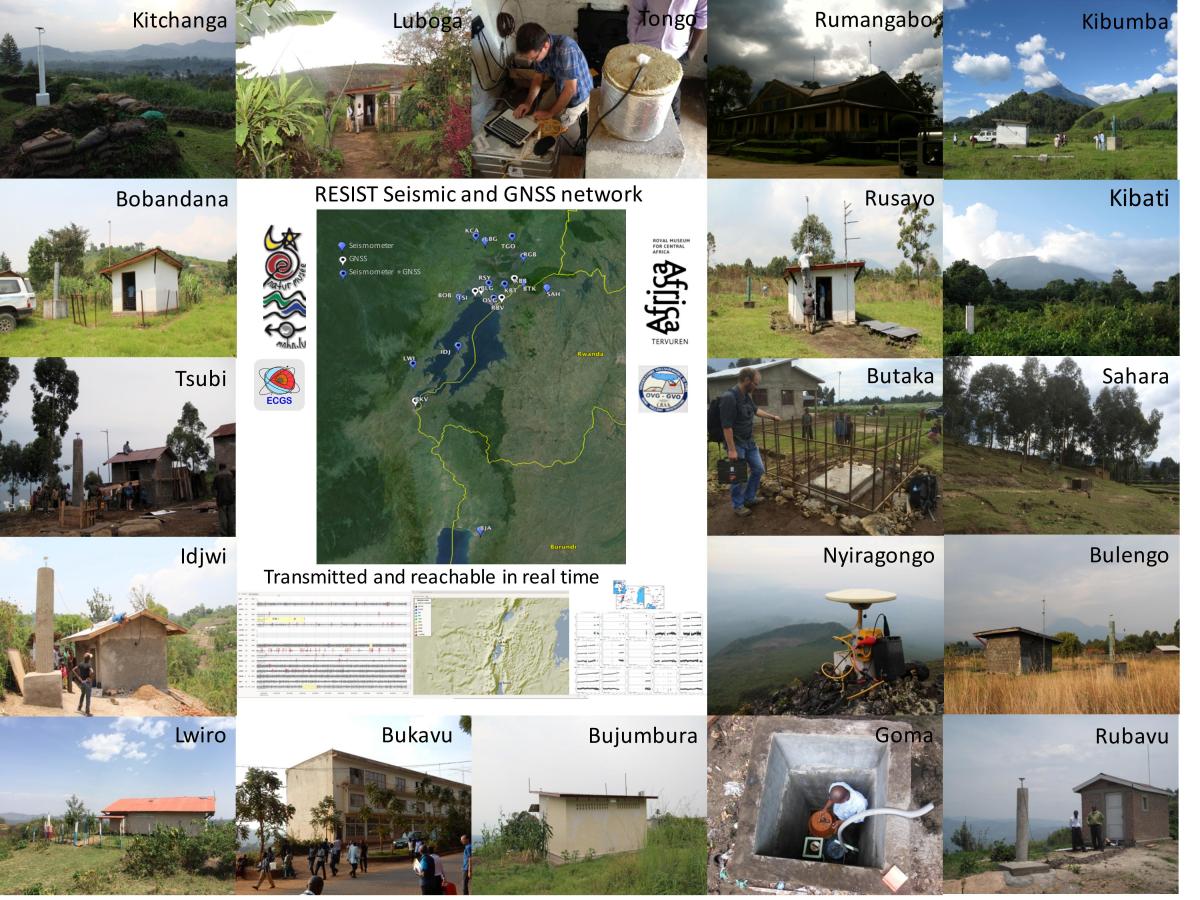 Seismic and GNSS stations installed and operational in the study area.

A "GNSS Training Course" was held in Bukavu, DRC, September 14-25, 2015. The participants were young researchers from DR Congo, Rwanda, and Burundi. The goal of the training was to learn to use high-precision GNSS technologies to monitor and research geo-hazards. The course material included overview of crustal deformation processes in Africa, various techniques to measure crustal deformation, practical training with measurements, file formats, GNSS processing, and interpretation and modeling of deformation signals. All students had to pass a final exam to receive a certificate from the course. 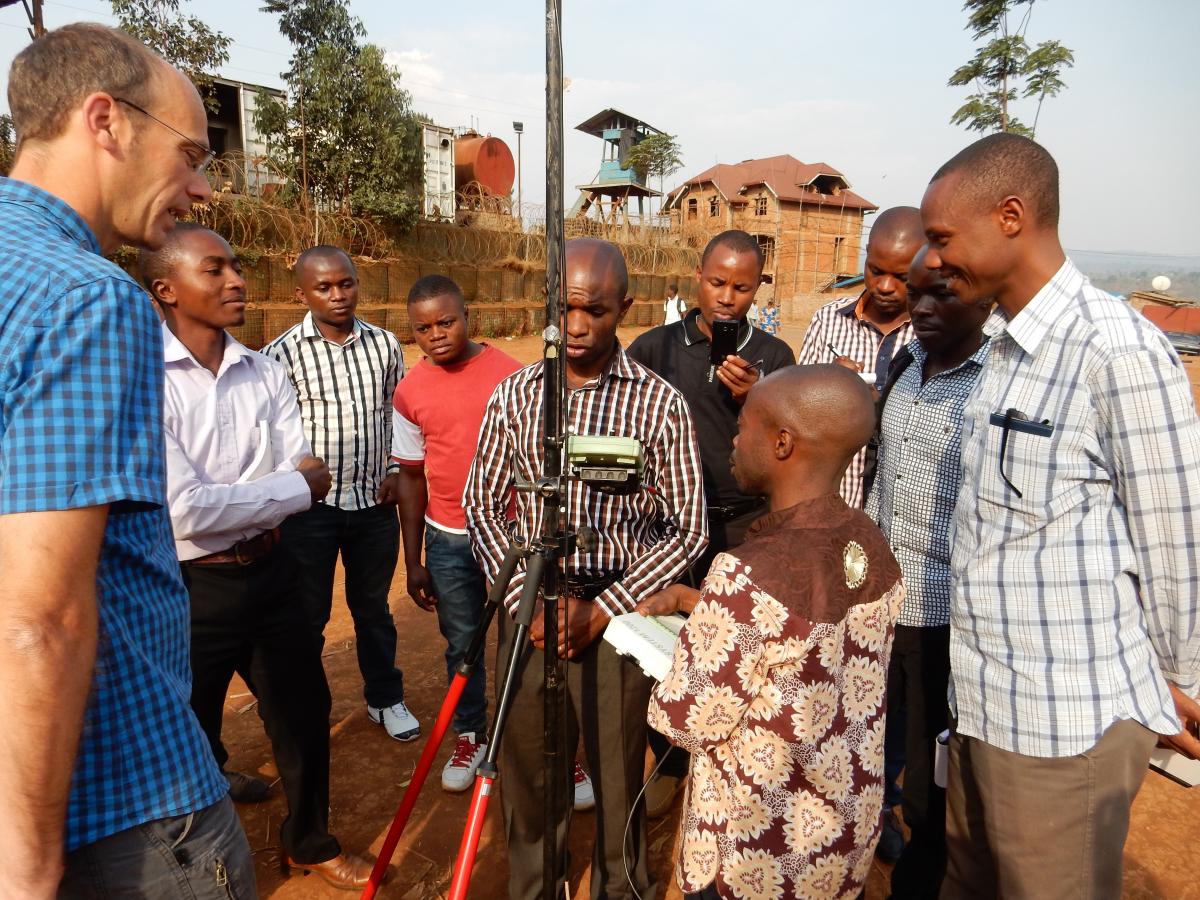 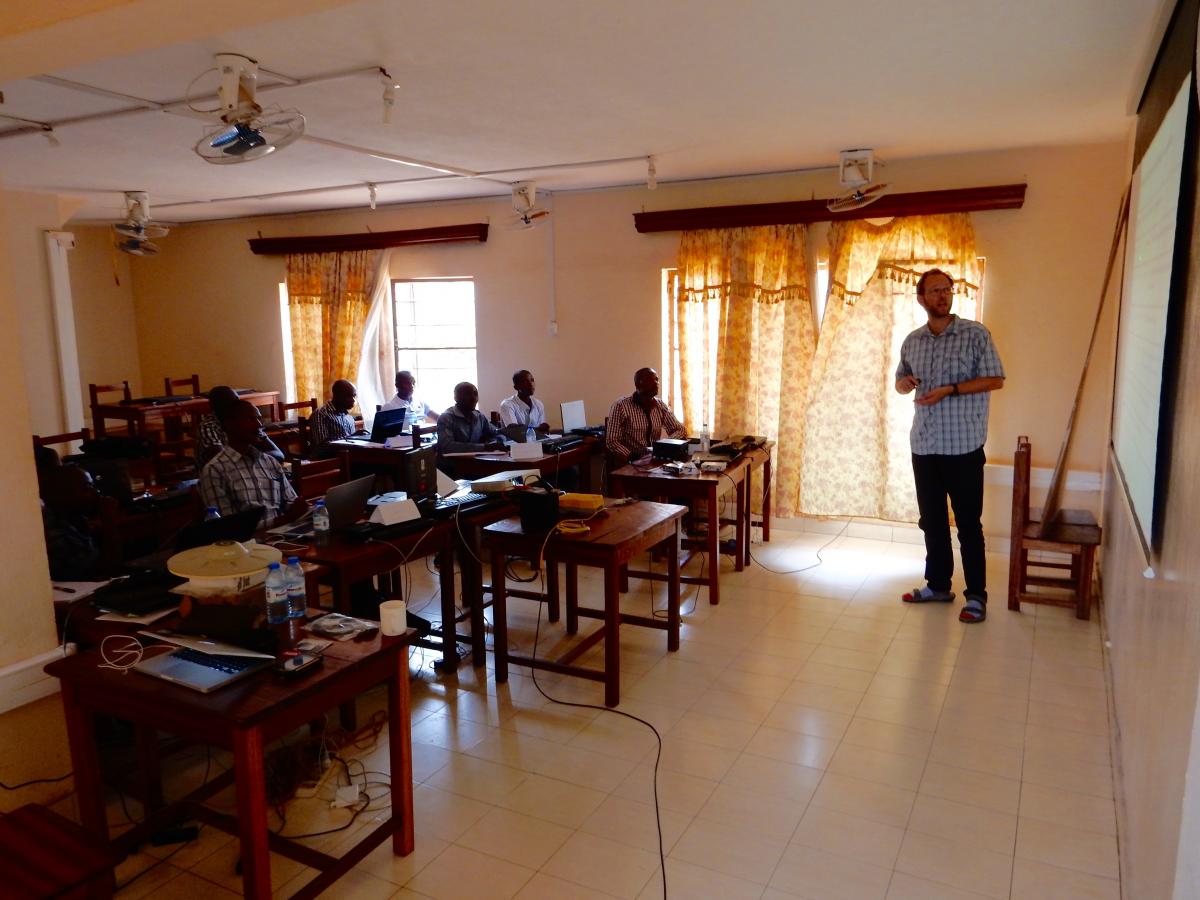 Training in Seismology with application to the Kivu Rift, September 2015 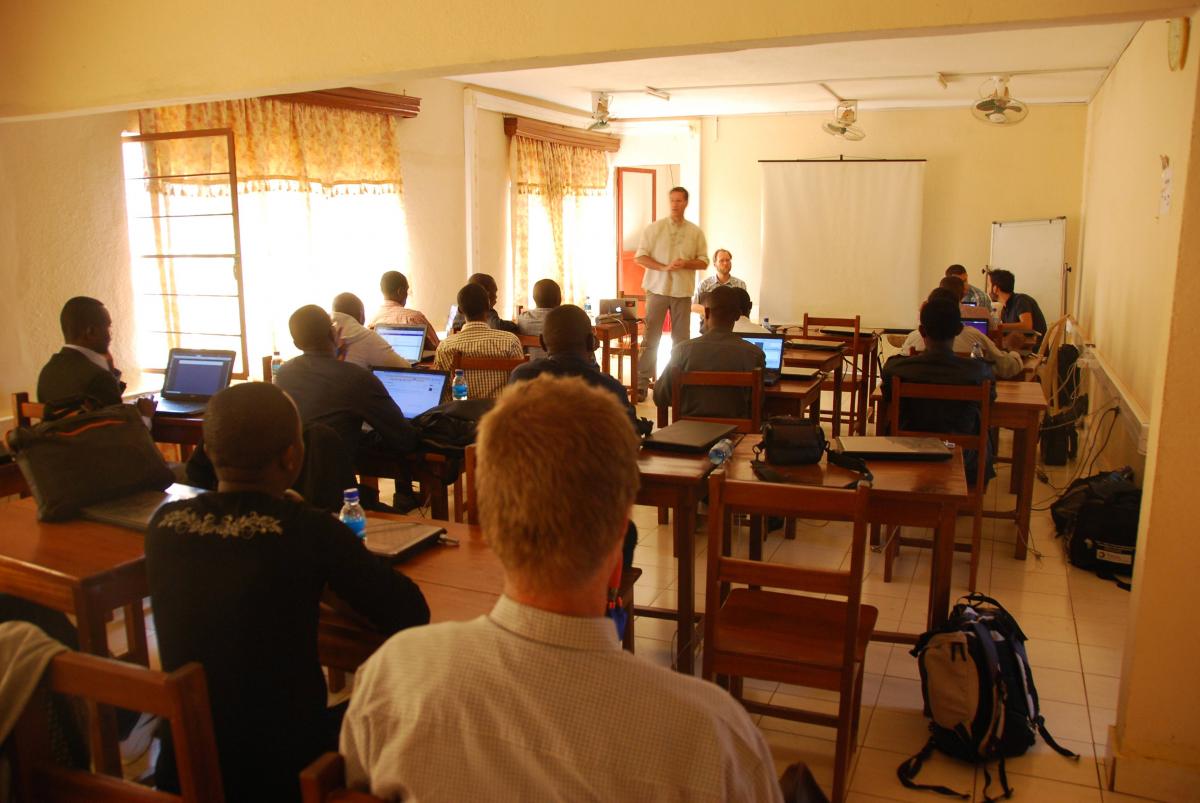 A moderate earthquake struck the Kivu region during the night of August 7th, 2015. Local authorities report 3 casualties and several injured in DRC and Rwanda. The event took place while we were still in the phase of deploying and setting up the RESIST seismic network. We could however record the event in real time with 4 telemetered seismic stations installed in Goma, Rumangabo, Kitchanga (DRC) and Bujumbura (Burundi).

Waveform of the earthquake recorded at Kitchanga seismic station. Waveforms of the 4 telemetered seismic stations in Goma, Rumangabo, Kitchanga and Bujumbura are presented below in this figure.

The 4 local telemetered seismic stations agree well with the information from global seismic agencies such as USGS, that is the main shock took place at 1h25m UTC (3h25m local time) near Kalehe. Adding the 4 local stations does not allow to compute epicentral location that differs significantly from the solutions provided by global seismic agencies. This is due to the small number of local stations available as yet, the uneven station distribution with respect the epicenter, and the absence of precise local velocity model. See attached map for epicenter localisation estimates. 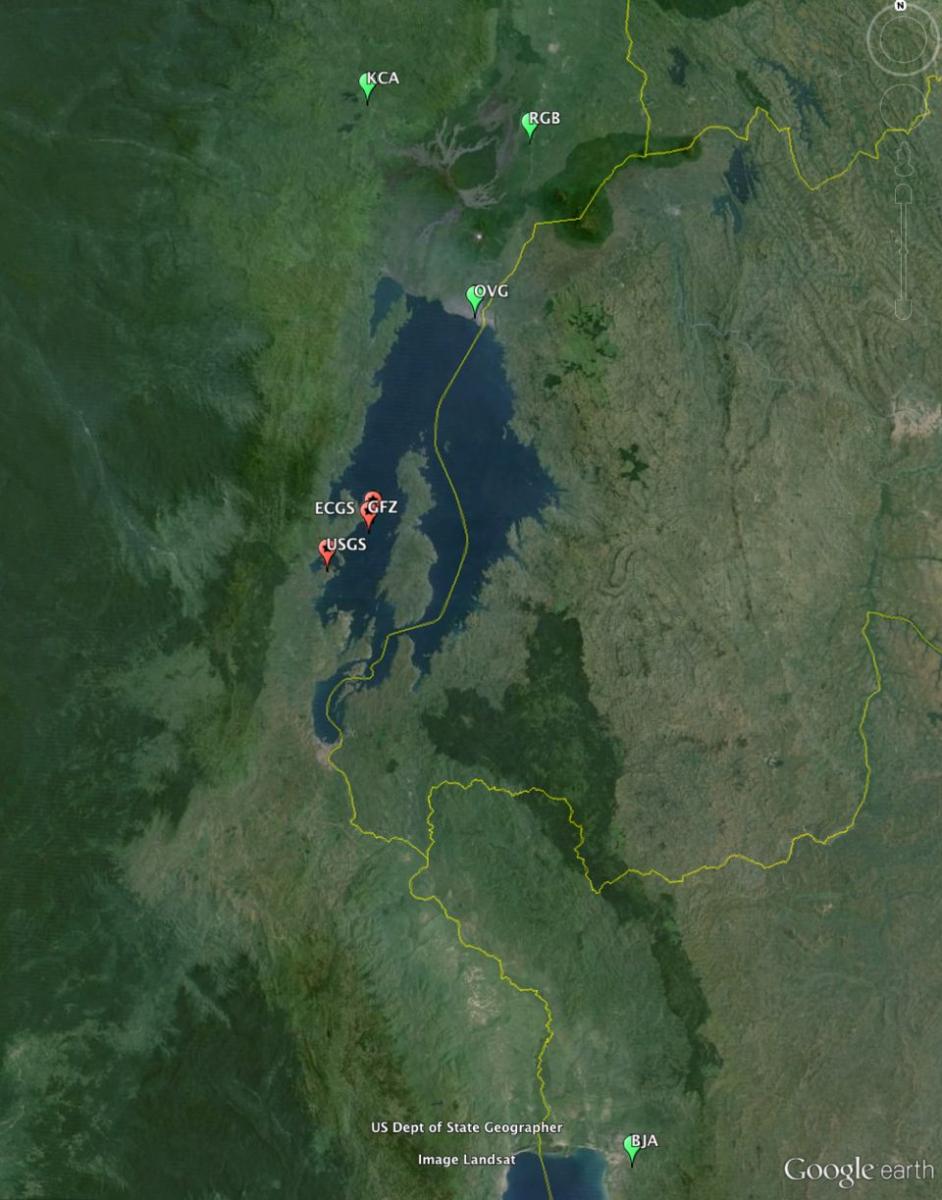 Localization of real time seismic station operated at the time of the event (in green)
and epicenter localization from global seismic agencies (USGS and GFZ)
and preliminary computation taking into account the additional 4 local telemetered stations (ECGS).

Magnitude is estimated between 5.6 and 5.8 depending on the method used. Here also these data are preliminary. Adding more non telemetered local stations is likely to improve the results, and more specifically the depth that is currently estimated between 7 and 12 km.

Please note that this information is preliminary and result from procedures and a seismic network under development in the frame of the RESIST project. At the current stage, these results can by no means be considered as precise location.

Fortuitously, two geologists from the RESIST project team were present at that time and report. 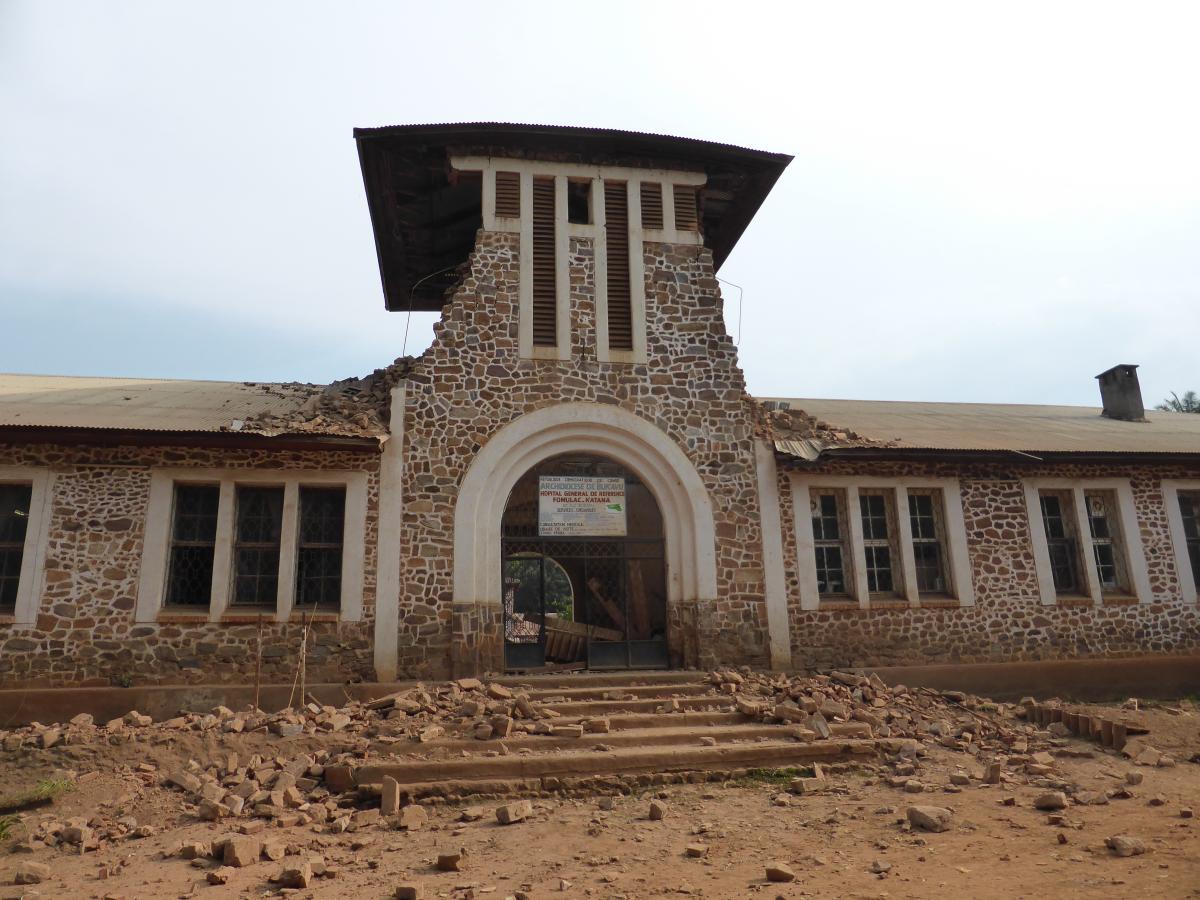 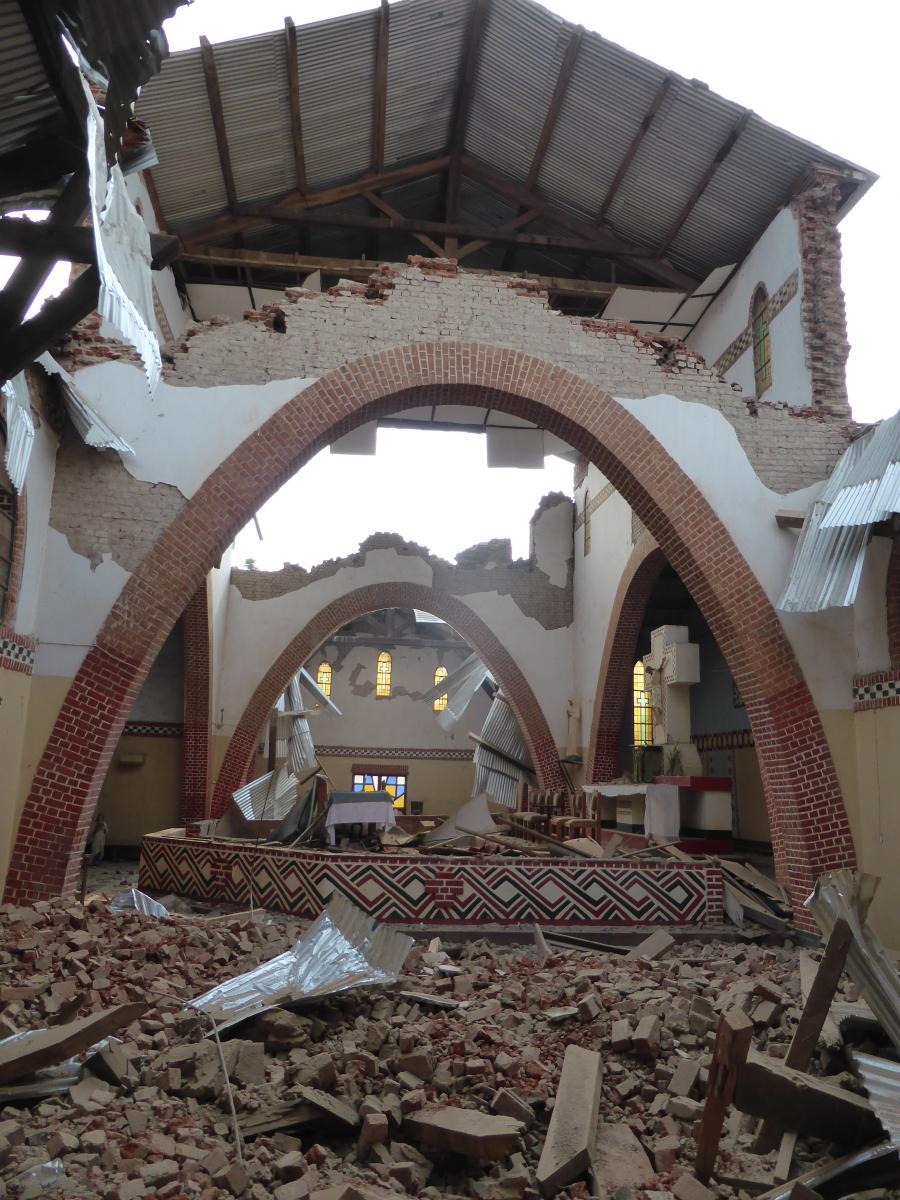